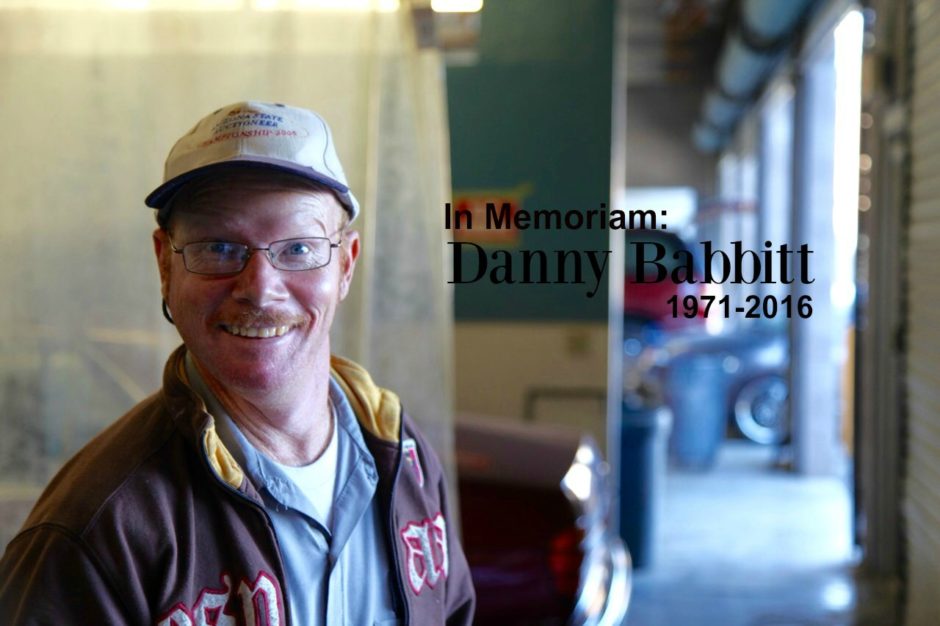 Struck by lightning twice or in Danny’s case struck in a head injury car crash twice.

Danny, my little redhead was in a car accident April 6, 2016.  Danny was always known for being in the center of trouble. From the youngest age Danny always had a way of making everybody laugh and yet scaring me to death. He was difficult but always kept us laughing. He filled my life so dread of what next, but so much joy as well.

As a little tyke, Danny got in the car and shifted the gear, driving it down the driveway, bumping over the neighbor’s sidewalk and stopping about two inches from going through the garage door crashing the car.

We were very lucky Danny had only bumped his chin and it was the only thing bleeding.

Later that year at Christmas Danny was once again at the steering wheel and his older sister, Connie, had just jumped out of the car leaving the door open so another sibling, Larry, could get out. Connie turned and saw the car start to roll so she quickly shoved Larry back inside just as the door hit the brick wall and bent the door. Had Larry been out it would have killed him.

Another time Danny had driven the neighbor’s jeep into the river. We had gone to the Serventes ranch in  Mohawas, Mexico. We had a lovely day where the kids could see the turtles laying eggs and we would gather some of the eggs and eat them. Angie kept getting bit on the cheek by the Serventes monkey. It was a day filled with lots of fun and laughter.

While we were enjoying our day somehow Danny had slipped away and got in the Serventes jeep and had shifted it into gear and rolled it forward into the lake. Luckily one of the Serventes boys had seen and had jumped in before the jeep went too far into the lake.

By the time Danny was three years old he had already been in five car accidents with him at the wheel so it was no surprise that a car crash would take his life.

At sixteen Danny got in a fatal car accident that killed someone and left Danny with a head injury. After years of rehab and much effort Danny was able to regain the use of his legs…with a drag, talk…with much effort and a stutter, and even speak spanish again.

Danny went didn’t let this stop his sense of humor. Danny had daily challenges now but he still looked on them with laughter and joking.

And in fact, he looked on it with positivity. As an extreme daredevil, the accident might have been the best thing to keep him alive longer and he knew it.

Danny’s brother and sister in law took him in and offered him a great life.

Danny eventually was able to work at his brothers mechanic shop in Lehi and drive a little golf cart all around. He could be seen driving along, stopping to make people laugh and made lifelong friends on the streets of Lehi.

Danny even wrecked his golf cart. One day he backed it up into Darrin Shumways vehicle and ended up becoming best of friends. Darrin was always good to make sure Danny ate, included him in his family activities and really watched out for Danny. It has been a blessing to have special people that would watch out for Danny.

Even though Danny struggled with balance and walking he was a hard worker and a survivor.

One day while out working on his brother’s pool he got real thirsty and grabbed a bottle thinking it was water. He guzzled it down so fast and didn’t realize it was acid.

Back to the hospital for a few weeks to recover. His already difficult breathing and talking increased but he worked through it. The doctors told him no more caffeine, which Danny was known to have the biggest big gulp possible loaded with Dr. Pepper so this was a challenge for him. Needless to say, Danny never gave up his soda and he recovered quite well.

Who else can drink acid and survive? Danny was for sure a survivor.

Over the past few years Danny was slowly declining in speech, balance and his immune system was weakening. Even though he was still a positive joy you could sense he struggled with loneliness. He would say “you know I will probably never get married?” Through it all, he would say it with a smile or turn it into a joke but you could see it was wearing on him.

Last year, on his way home from a dentist appointment. Danny’s car was T-boned on his side. Instantly sending him to the hospital with the same head injury as the first accident. We could all just picture Danny making a joke of getting hit by lightning twice, but instead getting hit by car accident instead.

Danny survived for almost a week when we decided he wouldn’t want to keep going. The best thing for him was to let him go. The family voted and decided to disconnect him from everything.

I will miss my baby boy and while no mother should have to outlive their child I am at peace knowing his body is healed, healthy and out of pain and that he is with a loving Heavenly Father and one day I will see him again. He provided us with lots of love and laughter that to this day will bring us laughter as we remember.

Danny was such a joy that even his funeral went down for fun. We had the typical ceremony and buried him. Then back at the house, we had mariachis play and sing, we ate Danny’s favorite Mexican food and people shared their funny stories of Danny we all went home with laughter in our heart and a gratitude that Danny had brought so much humor and an example of a positive attitude in our life.